Skip to content
For the latest COVID-19 information and policies, please click here. Close
Explore our Health Hub / Sex, Sexuality, and Gender / Sexual Identity
Your sexual orientation describes who you are romantically and sexually attracted to. Have a crush? We’ve all been there. The teenage years are all about exploring who you are, who attracts you and what romantic relationships look like. This exploration involves your sexual identity or orientation. Your sexual orientation describes which gender(s) you are romantically and sexually attracted to. Crushing on someone of the same gender can bring up a lot of complicated feelings beyond just butterflies. You might wonder if you’re gay, and what that could mean for your future.

In our society, most kids are usually assumed to be heterosexual (attracted to a gender different than your own) until they announce otherwise (come out).  Once someone starts to realize that they might not be straight (another word for heterosexual) it can be a process to figure out what that means to them and how to share this information. But how do you even know if you’re gay, or bi, or queer?

There aren’t hard and fast rules. A lot of people have crushes during their teens that don’t necessarily influence their sexual identity as adults. When romantic and sexual feelings are new it’s not always easy to figure them out. For example, it’s common to have friendships that come with emotional intensity. These feelings might overlap or feel similar to the feelings that come up with romantic relationships.

You know yourself best.  That means you are the expert on your own sexuality! Sexual orientation is about who you’re attracted to. What does that look like for you? If you’re thinking about someone a lot, get butterflies around them, or think about kissing them, you might have a crush. If this person is the same or similar gender to you, you might be queer.

You don’t need to have “proof” to feel secure in your identity. Young people without much sexual experience who identify as straight are rarely questioned or doubted. If you think you might be queer, you can claim that identity before you’ve had any kind of sexual experience. Orientation is about who we experience attraction to, not about which gender(s) we have sexual experience with.

There is absolutely no rush to figure these things out! People understand their sexuality in a variety of ways and on a variety of timelines. Some people say they’ve known since they were little kids, while others when they are much older. Some people’s sexual identity changes over time, as they get to know themselves better. Sometimes people are sure they are totally gay or totally straight, and then fall in love with someone of a gender they may not have expected.

LGBTQIA is an acronym of some (but not all!) of the different labels for sexual and gender identity. Some of the letters in the acronym describe sexual identity, which we’re focusing on here, while some refer to gender identity:

While this acronym can be helpful, it certainly does not describe the full rainbow of sexuality or gender identity. There are others, such as pansexual, which is someone who experiences attraction to people, regardless of their gender or sexual expression.  Here are some other helpful terms to know. If you want to know more about gender, sexuality, and their intersections, check out this great resource.

Keep in mind that these terms exist to serve you

If you think you might be somewhere on the queer spectrum, there’s no rush to figure out exactly where. There’s space for you in the queer community even if you haven’t quite figured out where you fit. For some people, defining their sexual orientation can feel empowering and help them find a community. If it doesn’t feel that way right now, no need to pick a letter. And even if you did, that Q also stands for Questioning!

Sexuality is complex, individual, and can change. If one identity feels right to you right now, you’re certainly not locked in for life. The term that best describes you may not even exist yet and it may shift over time. That doesn’t make who you are any less real or valid. You don’t ever have to  assign a name to your identity if you don’t want to.  Sexual identity is personal: you are your own expert. 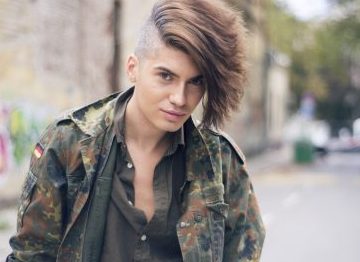