Skip to content
For the latest COVID-19 information and policies, please click here. Close
The Blog / You Asked It: Let’s Get Cliterate

You Asked It: Let’s Get Cliterate 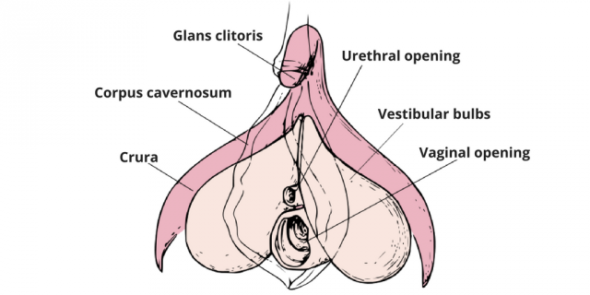 What’s a clitoris? My friends have joked about it, but it was never mentioned in sex ed and I’m kinda confused…

Great question! People with vaginas (in general, cisgender girls and some transgender boys and non-binary folk) have a clitoris. The clitoris (sometimes called the clit) is an amazing organ because its ONLY purpose is sexual pleasure.

The clitoris has over 8,000 nerve endings. That’s TWICE as many as the penis!

However, direct touch can sometimes feel overwhelming, uncomfortable, or painful. This is because it’s so sensitive. Many people prefer touching themselves (or being touched) around or near their clitoris, or in a different way altogether. This is completely normal. Every body is different.

You can see and feel the tip of the clitoris just above the vaginal opening and urethra, at the top of the vulva (check out the diagram above).

If you touch or press on it, you may feel a tingly feeling. This smallish bump is called the glans, and it’s partially covered by the clitoral hood.  People sometimes describe the clitoris as a button, even though its size, shape and color vary. Every clitoris is beautiful and amazing just the way it is.

The clitoris is a whole lot more than a button, though.

The part that you can see is only the tip. The internal clitoris (which you can’t see because it’s inside your body) is made up of the clitoral shaft, two crura that look a bit like wings or legs, and the vestibular bulbs, which wrap around the vagina. You can see all this in the diagram above. The whole clitoris (internal and external) is about 4 inches long. You may be able to feel the shaft just above your glans.

When someone with a vagina becomes aroused (or turned on), the external clitoris often gets a bit stiff and puffy. This means that it’s filling with blood, and may feel extra sensitive. You can’t see it, but the internal part is doing the same thing!

It’s partially thanks to the clitoris that many people with vaginas enjoy vaginal sex.

Inserting a penis, toy, or fingers inside of a vagina can put pressure on the internal parts of the clitoris, which feels really good to some people (but not everyone). Some scientists think that the clitoris is also responsible for the g-spot! However, many people still need direct clitoral stimulation to have an orgasm (or come). Again: every body is different.

There have been a lot of misconceptions about the clitoris (and how people with vaginas experience pleasure) throughout history.

Know that people experience orgasm and pleasure in a lot of different ways, and none are “better” than any other.

It’s too bad that no one talked about this in your sex education class, but unfortunately it’s also not surprising. Unfortunately, sex ed often ignores this awesome organ because it doesn’t play a role in reproduction. But pleasure can be an important part of sexual health, and understanding your own body in terms of pleasure (when you’re ready, and if you want to!) can be an amazing and powerful experience.

If you have any more questions about sexual health and are 10-26 years old in NYC, you can make a confidential appointment with an adolescent medicine specialist at Mount Sinai Adolescent Health Center. We can also provide birth control, condoms, STI testing and treatment and more– all at no cost to you.

P.S. If you want to know more, check out this adorable French cartoon!

A version of this post was originally published in September, 2017.

The Mount Sinai Adolescent Health Center is located in New York City. It provides comprehensive, confidential, judgment-free health care at no charge to over 12,000 young people ages 10-26 every year. This column is not intended to provide medical advice, professional diagnosis, opinion, treatment or services to you or to any other individual, only general information for education purposes only.

The clitoris is an amazing organ because its ONLY purpose is sexual pleasure.

You’ve got questions. We’ve got answers. At the Mount Sinai Adolescent Health Center, we answer a lot of questions. Topics range from nutrition to pregnancy prevention, and everything in between. Now, we’re bringing these questions back to you with our weekly advice column, You Asked It. Got a question? Send us a message on Facebook, Twitter or Instagram.

You Asked It: Safer Sex with my BFF

I want to use condoms with my friend, even though we haven't before. How can I talk about condoms with her? You asked it, we answered!

You Asked It: Gender is a Spectrum

What does it mean to be "non-binary"? You asked it, we answered!

My friends spend a lot of time talking about sex and how hot girls are. But I’m not interested in sex. I feel so left out—what’s going on? Is this normal?